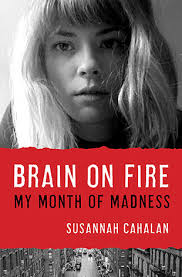 I recently read Brain on Fire:My Month of Madness by Susannah Cahalan. It is about a young woman working as a reporter in NYC, who suddenly shows signs of psychosis. She spends over three weeks in the hospital experiencing mania, paranoia, hallucinations, catotonia, etc.

It turns out she had something called Anti-NMDA receptor encephalitis. An auto-immune condition which put her brain under attack by her own body. It was treated with IVIG, plasmapheresis and steroids.

I read this with particular interest because of Seth and his PANDAS (which is now being called PANS because it seems strep isn’t the only trigger for many children).

The doctor that initially treated Susannah Cahalan accused the 24 year old of partying too much and suffering from alcohol withdrawal, (despite the fact that she wasn’t an alcoholic). He couldn’t figure it out, so he came up with that little diagnosis.

The schizophrenia label was tossed around.

She was in really bad shape and could have very easily been permanently institutionalized. She could have easily died from her condition if a different, brilliant doctor had not taken interest in her case.

Cahalan’s story brought into focus how truly fragile our bodies are, but also how miraculously resilient.

Her story was told from a reporter’s viewpoint, piecing together details from her month of madness from medical records, family notes, interviews with doctors and friends, etc.

Read more about the connection between Anti-NMDA receptor encephalitis and autism here.

As a mother continually searching for answers, this book made me want to never give up.

5 Responses to Brain on Fire