So much has been going on I have not even had time to obsess over my new hair cut.

A few years ago, before we even got Jingle, I checked out a local charter school here, hoping it might be a fit for Riley. I’d found out about it after reading a book called The Nurtured Heart, which I read about on Kyra’s blog. I was looking for a counselor trained in the Nurtured Heart approach to work with Riley. What I found was a school that used the approach with their students. It turned out the school didn’t have the right supports for what Riley needed.

Seth was on a waiting list, but there were many potential students in front of him and it never seemed like a reality. Over the summer they wrote to ask if I wanted the deposit back or if we wanted to keep him on the waiting list, and I figured, what the heck? Keep him on. And then I forgot about it. At this point there were four students in line in front of him. We’d looked at a private school for him last year, and it was lovely, but it required us to sign a contract for the full school year. If it wound up not working for Seth, we would still be obligated to pay. We didn’t feel we could risk that with Seth’s health issues. And there was something more intangible that held me back from sending him. I had this idea in my head that Seth and I would have a year together, to make up for all the time in his life when the focus was not on him. If I want to, I can get on a real tear about how neglected he’s been.

I even started to write a whole victimy piece like this for my last writing group meeting and consciously stopped myself. Instead I wrote about the glorious soul Seth is. He’s not a victim. He’s been loved every second of his life. He is purposeful and came here for a reason. It felt good to remember this.

So Seth and I have been having fun. We take the dogs walking as soon as Riley leaves for school. We come home and have breakfast and do reading and some light academics. We listen to books on tape while he plays with Lego. If Todd is home he does math with him. And then later, I take him bike riding. He’s all about the bike. September 2012 will forever be etched in my memory as a little blond boy, whizzing by on his bike under a breathtakingly blue September sky. For the last eleven years I could never look at a sky like that without thinking of 9/11, but now when I see that blue, I think of Seth. He works with a dog trainer on Fridays. He helps in the kitchen. It’s all lovely and sweet, and there isn’t a thing wrong with what we are doing.

But the charter school called. They have a spot. They wanted to see Seth. They assessed him. He’s a little behind for his grade level because of our relaxed pieced together curriculum, but he’s fine. They know all about his PANDAS and they still invite him to be there.

Six weeks into our mother/son love fest, the world wants him back. A couple of weeks after I reframe him in my mind, from victim to powerful, the opportunity arises.

We would never send him to any old school. He is so sensitive. But this is the “Nurtured Heart” school! We felt in pulling our kids from school that academics could always be learned but unlearning broken self-esteem was much more difficult. This was why we pulled Riley, Seth came along for the ride, but then, his tics are what kept us from putting him back. He has no shame about them now, but all it would take are one or two kids to pick on him. I don’t think that will happen in this school. We will go in and talk to all the children about PANDAS. Seth and I together will explain it. When kids are given the respect of being told what is going on, they always respond with compassion.

This school is inter-generational. They have combined grade levels where students learn from being with those older and younger than them. They have senior citizen volunteers who build nurturing on-going relationships with the children. They also have college student volunteers who work with the kids. They have PE every day. The teachers are happy to be there and flexible and eager to learn, readily admitting they don’t have all the answers.

A week ago this wasn’t even a possibility. He’ll likely start on Tuesday. Seth is both “scared and excited.”

I’m left feeling remorse for the loss of “our year” but I think this is an opportunity we can’t pass up. Being immersed in a school like this could change the trajectory of Seth’s life. My friend Amy reminds me I can still do all the things I wanted to do with him. I can take him bike riding. I can schedule regular one on one on the calendar, write it in ink. This is particularly soothing coming from her, because she is a fellow home schooling friend and I respect her very much. The dog trainer says she’ll work around his new schedule.

My heart hurts as I buy khakis and polos. He is such a free spirit. He is so not khakis and polos. He’ll be uncomfortable in these clothes. I snip off all the buttons which he hates, and wash them many times to soften them up. Tomorrow I’ll run around looking for somewhere to put snaps or velcro where the buttons should have been.

I worry he’ll be exposed to so many germs. That is my big fear, worst case scenario. His health takes a dive. But can we lock him away from the world forever? Might the lift he gets in his spirits from being around so many positive people, and from feeling a sense of accomplishment and belonging also boost his immune system?

Rev. Michael Beckwith says to ask at times like this, “What’s the best thing that could happen?”

And if it doesn’t work out, I am not afraid to have him home. It will not be overwhelming like it was when we first took Riley out of school.

So say a little prayer for my brave boy this week. It’s a big one for him.

To all of you who know him and love him, in person or just here on the blog, I thank you for holding him in your hearts. 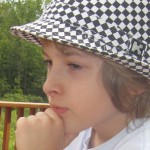 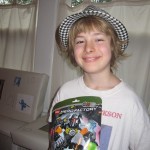 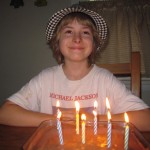 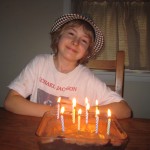 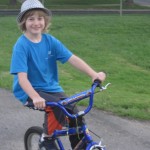 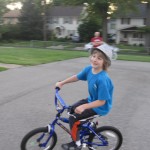 This entry was posted in appreciation, PANDAS, Uncategorized. Bookmark the permalink.