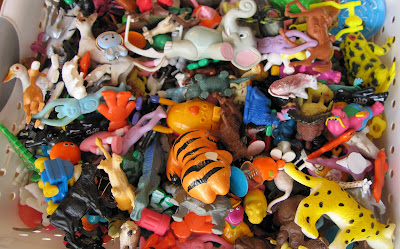 We have a bin, up high in the hall closet where tchatchkes go after they’ve been home 24-48 hours. Every little prize from the doctor or dentist. Every cheapo toy incentive from a well meaning teacher or librarian.

The tchatchkes come along on all road trips. Each time, the kids are delighted to see them again. They set up tchatchke colonies all over hotel rooms. They make believe elaborate scenes where monkeys and Garfield, Smurfs and elephants, Pac Man and Barney live in peace.

I’ll have my nose in a book. Todd will be watching ESPN, and they’ll play with the tchatchkes. It’s a vacation tradition.

Todd and I don’t give a rip if a tchatchke turns up missing. In fact, we encourage it. One less tchatchke. There are so many, the kids barely notice if they lose one.  No doubt some of our tchatchkes are hiding in crevices, behind curtains where maids fail to vacuum. They’ve definitely been left at rest stops along the side of our nation’s highways.  We know of one who is sentenced to a lifetime of solitude under a table connected to a fold out bed on Holland America’s Westerdam cruise ship. (That time we fit as many tchatchkes as we could into a two gallon zip lock bag and threw them in the suitcase). There was no way to rescue him. Seth had a hard time letting that one go. Two years later, he still misses him.

I love our tchatchke bin and what it represents.

I love our kids.

This entry was posted in Parenting. Bookmark the permalink.

14 Responses to Handy dandy travel tip for vacations with children