Why is this boy smiling? 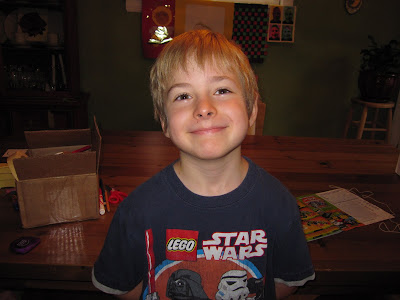 A) Because he adores his mother, and especially loves her taking pictures of him.

B) Because his mother is beautiful.

C) He’s in a state of appreciation for all his mother does for him.

D) He’s forsaken his mother, developed a crush on Emma Roberts (Julia’s little niece…star of Hotel for Dogs), and he is hiding a picture of her he printed off the computer behind his back.

Little dude isn’t even eight yet! I thought we had more time! I thought we had a deal, he would love me and only me, forever! HT thinks I should find solace in the fact she’s a petite brunette, “like his mother.” Nice try HT. I searched for solace but came up empty.

Okay, so it is kind of cute, the way he’s carrying the picture around, putting it on the music holder of the piano as he plucks out little tunes. To her I’m assuming. And it is sweet how his face turns red at the mention of her. And though I was hoping for a fabulous gay son, I guess it’s okay he’s evidently straight.

As long as Emma doesn’t mind moving in with us. ‘Cause I’m never letting him leave me.

20 Responses to Why is this boy smiling?