Today my sweet husband is 45.

He ushered in 45, staying up all night with Seth who was puking. He took the big rug out of Seth’s room and hung it over the deck to be hosed off later. He took load after load of towels and sheets two flights down to the basement to be washed. He soothed his sick boy.

Todd and I both had the same bug earlier in the week. It wasn’t pretty.

The only thing he wanted for his birthday, was an evening with me.

I arranged a sitter and planned a date at a wonderful restaurant. I’ll be calling soon to cancel.

It might not seem like a big deal, but seriously, it was. We rarely get out together. He’s very disappointed.

This is Todd and Seth kickin’ back in our little cabin on the Alaska 2008 cruise. Tight squeeze in that room, but we had the best time. He loves his boy.

This is the young hospital pharmacist I fell in love with.

Here he is with Riley at Seth’s preschool dance  a few years back. 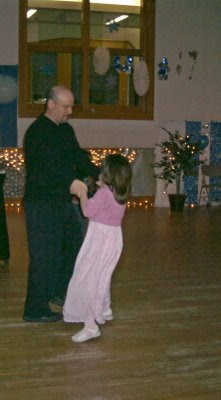 He never wavers about her. He holds a vision of her being successful, and powerful and happy in this world. He claimed it the day she was born. I didn’t see her for a couple of hours after they got her out, but he did. He was with her the whole time. He describes her eyes, as having been so aware, so wise. He’d never seen anything like it. She was otherworldly to him. “She’s here to do great things,” he always says.

When Seth was born, I heard his cries and remember Todd’s soft voice, all choked up, carrying him over to me, whispering to our new son,

Here we are at my friend Janet’s renaissance wedding a few years ago. He’s was a trooper about the costume, and he always puts up with my close up self-portraits of us. The more up your nose obnoxious the better. Perhaps you are aware of his homework whispering talents? 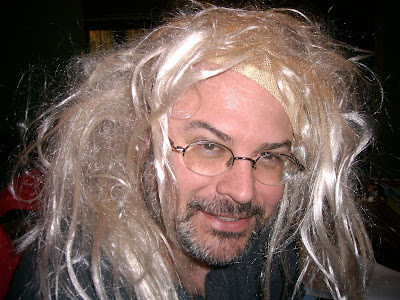 Or that fact that he recently went all the way with the bulb bald head.

Here he is getting a smooch from my sister. She loves him. How could she not? 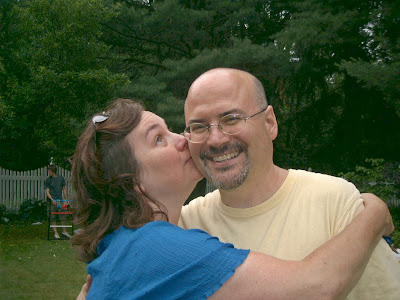 Come hell or high water, baby. We’ll have our date. I promise. Not tonight, but another night soon.

I love you. I appreciate you.