Jingle is so well behaved, it’s sometimes easy to forget how young she is. She had her first birthday just a couple of weeks ago. In this shot she looks like such a pup.

I may put her in a “down,” but I can’t make her look at the camera. Such a little baby. So easily distractible.

Though sometimes she does seem more like a teenager.

This is Jingle at martial arts. She curls up in a tight ball, making herself unobtrusive. She knows she’s in for a long (hopefully boring) hour or two. Might as well take a nap. This photo shows how her tail fans out, and how colorful she is.  Since she’s been coming with, Riley hasn’t had one meltdown or even a close call at martial arts. After Thanksgiving Riley will start learning a new form. That is usually stressful and Jingle will be there to help if needed. If not, there are always a few more zzzzzzzz’s to catch.

Love is in the air…

Jingle has a boyfriend. His name is Flip. He lives on our street, and he has a fenced in yard.

Of course, Jingle plays hard to get.

I’m not even looking at you. I’m a service dog. You’re just a mutt from the pound. I’m checking out the fence. The fence is way more interesting than you. Wait! I think this smell is you! Wait! I was once just a mutt at the pound.

Okay I admit it, you had me at hello.

She’s a sucker for a salt & pepper beard.

It is important to practice obedience with Jingle every day. She is so smart and she really does try to push it to see what she can get away with. If we put her in a “down,” down it is. Whether it is five minutes or three hours. This may sound cruel, but if we plan on sending her to school with Riley it is very important. If she gets up, it is imperative we correct her and put her back in the exact same place she started. If we just put her in another “down,” say she walked ten feet away, then she’s ten feet closer to whatever it is she was aiming for, and she’ll keep doing it, breaking her “down,” getting closer and closer to that cat, or that bit of food, or whatever.

So, the picture above shows Jingle in a “down.” I am walking around her dropping treats on the floor and she is not allowed to go for them unless and until I say “free!” She just turned one year old, but look how patiently she waits.

Jingle has a fan club. Everyday after school, she is mobbed by children and grown-ups on the playground while Riley swings and Seth plays. There were a bunch of little girls who used to play “kitty cat club,” where they would all pretend to be cats, but they’ve changed it to The Jingle Club. They form a huddle around Jingle, and chant, over and over, “We love you Jingle! We love you Jingle! She’s a good girl! We love you! We love you!” There are so many children around her you can barely see Jingle in there, rolling on her back in ecstasy, absorbing all the attention.

Above, Jingle is wearing the hat of one of the girl’s mothers.

This rescued puppy from Kentucky is doing pretty well for herself. I guess that’s what happens when you radiate pure joy, and love everyone you meet.

Give That Dog a Treat!

Riley is not allowed to go on the Internet without permission. Period. Today she did it, and I had to follow through with consequences, banning her from the computer for 24 hours. She pitched a very big fit, screaming and stomping all the way up to her room. Jingle followed her. I grabbed two Pupperonis from the kitchen cabinet, and marched upstairs to her room. Jingle stood on the floor beside the bed, watching Riley carry on.

I pressed the Pupperonies into Riley’s hand, and walked out of her room, closing the door behind me. As I shut the door, I saw Jingle hop up on the bed. She loves Pupperoni.

Riley and Jingle remained in her room for about ten minutes. Then they came downstairs, and Riley played happily with her brother for the rest of the evening. No more meltdowns. No talk of the computer.

I’ve been finding when Riley is upset, if I just put the Pupperoni in her hand, she starts breaking off pieces and feeding them to Jingle. The change of focus, feeding the treats, seems to put Riley’s brain on pause long enough to hop off the fret merry-go-round, the continuous loop of upset which can often go on for an hour or more.

This was the first time I left them alone behind closed doors to work it out. Riley is the kind of kid that can’t tolerate unkindness to anyone, especially animals. She implodes, rather than lashing out, so I knew Jingle was safe with her.

It felt liberating to be able to hand off to the dog, what might have taken me much longer to accomplish. No twenty minute “talking it through” going around and around in circles.

We wound up having a great night.

We have at least four people who make a point of walking their dogs through the neighborhood, off leash.

One of them doesn’t walk with the dog, it kind of does its own thing, crapping wherever it wants and this person doesn’t pick up after it, or even see it go, because she’s walking twenty feet away from the dog, absorbed in her own thoughts.

One of the dogs appears to be very well behaved, but he’s scary looking,of the pit bull mix variety, and his very presence is a bit intimidating when he’s not on a leash. Yes, yes, I’m sure he’s a perfectly sweet dog(one that could eat Riley’s 11-thousand dollar service dog for breakfast if he chose to).

One of the dogs does not listen to his owner at all as he tries to call it away from Jingle. It seems friendly, but still. If it does not listen, it should not be off leash.

One of the dogs lunges and barks at other dogs, who can’t really do much about it because they are on leashes.

What is the draw of “off leash” walking in residential neighborhoods? I don’t understand it, and in the interest of full disclosure, the reason it really bugs me is because Jingle thinks dogs off leash means play time. She got to go off leash at 4 Paws in the fenced in area of the facility. She starts to lose her mind manners, making life harder for me, when other dogs are off leash. We’re working on it. Luckily, she’s a quick study.

*Photo of Jingle above, walking on leash, the way God intended it.

On Wednesdays the kids go to therapeutic dance class. There are four in the class, including Seth. One boy about Riley’s age jumps and flaps when he gets excited. The other girl seems very intelligent, but she processes things a bit more slowly than the others.

The boy who appears to have autism loves dogs.

He loves the idea of dogs. He reads about them, and talks of them, but he’s never been brave enough to pet one.  He longs to, but can’t bring himself to do it.

Jingle turned her head to look at him.

He was all concentration. Such courage.

She shifted her head and he lurched back.

Jingle turned away from him to look at the other children who were doting on her.

The boy shakily stretched his arm forward and down, and with two fingers, he touched Jingle’s backside. As fast as his fingers swiped her fur, he pulled away.

He and his mom shared a huge grin, and then he scampered off toward the bathroom saying,

His mother told me it was the first time he ever touched a dog. 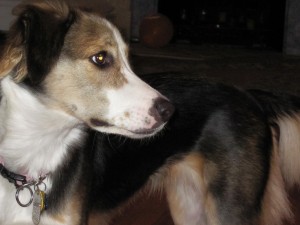 Why the Long Face?

Do you see the cute little pink area just above her nose? I love that part. Riley loves her black mustache.

What about the hair behind her ears. It looks like she’s had a ”body wave,” in that section. Remember body waves? I can’t believe I ever permed my hair. Thought it was a necessity. Oh 80’s. I sure don’t miss you.

Jingle has been kicking butt in the “don’t chase squirrels” game. When we first got her, she would tug on the leash to try to go after a squirrel. Now, she sees a squirrel, and she looks up at me (or Todd) for a treat. She wants the squirrel. You can feel the tension in her body through the leash. She is a bit overzealous taking the treat, but she is trying so hard to be good, and not chase the squirrel, even though she would soooo love to. And the squirrels are nervy little creatures. They mess with her on purpose, sticking their squirrel tongues out at her, shaking their little squirrel hips. Go hibernate already squirrels.

But St. Jingle refrains. She is a quick study. Such a smart girl.

The head of special ed for the district wants to come to our house one day soon to see Jingle and Riley in action. The Riley/Jingle team is not ready for school yet, but we are getting the ball rolling. There are a lot of details to be hammered out and there has been some resistance among certain staff, but this is the first service dog the school has had to deal with. Some people find new things difficult. Some people are afraid of dogs. Some are allergic. We have to do our best to put policies in place to make everyone as comfortable as possible, particularly other students who may be fearful. I spent last week making myself sick with worry over it all, but I’ve worked very hard and have reached a state of peace around it. If Jingle is meant to be in school with Riley, it will happen. Everything about this dog has been so easy. It all fell into place. There was no  pressure. There was no pushing. I have to allow the energy that brought us the dog to work its magic. I’ve let go of my white knuckle grip. Worst case scenario, Jingle doesn’t go to school, and we have her at home to help with homework, cello practice, and your everyday run of the mill meltdowns. Riley still benefits.

In the meantime, Riley and Jingle continue to bond. 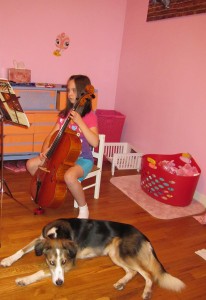 Jingle cried her eyes out at martial arts the other night when Riley and Seth left the room to get a drink.

She sleeps on Riley’s bed.

She wags her tail furiously when Riley comes out of the building at the end of the school day.

She hangs with Riley in her room while she reads her books.

It is going very well.